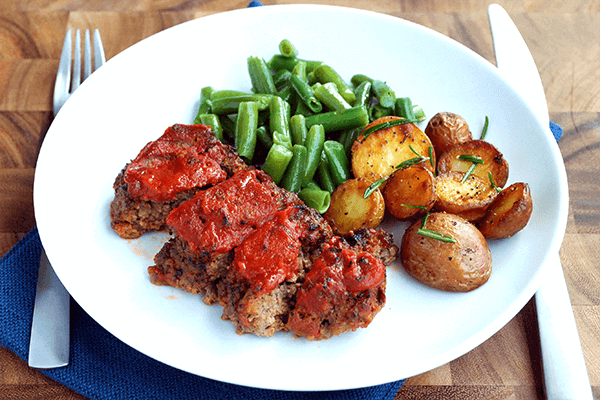 Meatloaf is a word that makes my husband shudder.  I was unprepared for his guttural reaction as I brought my masterpiece to the table as newly-weds.  Before the dish touched the table, he related a traumatizing childhood memory of a recipe involving expired meat and last week’s leftovers while it began to dawn on me that we might be getting take-out that evening.  Even though I shared the details of my recipe with him and provided material evidence of the freshness of the ingredients there was no persuading him.

Thus, my culinary journey with this classic American meal began and ended in one evening.  To this day (22 years later) I have yet to persuade my husband to eat it.    So, it amuses me slightly that I write about it today because it is still taboo in our house.  However, The Mighty Meatloaf is deservedly Healthy Gourmet’s best-selling meal.  So, maybe if he reads this blog and finds out how it is supposed to taste, I might persuade my husband to finally try it…

The last thing I expected to find when I started looking into the history of meatloaf is that the meal predates the 1800s. Yes indeed, it harkens back to 5th century when a Roman chef of sorts called Marcus Gavius Apicius tells us in his cookbook “De Re Conquinaria” (The Art of Cooking) of a recipe for baking meat, bread and wine patties using local herbs and spices for flavoring.  Unlike today’s recipes, animal brains (‘offal’) were among the ingredients, but the gist of it was the same as the modern meatloaf.

Interestingly in France they would not find the use of animal brains unpalatable.  In fact, they are a delicacy and the French serve them in dishes such as “cervelle de veau” and “tete de veau”.  Meanwhile in Pakistan, Bangladesh and parts of India a dish involving brains with the name “maghaz” is popular.  In addition, the Turkish fry or bake brains and consume them as a salad.  China eats pig brain and India eats goat.  However, happily for most of us, America’s meatloaf uses ground beef, turkey or pork or a combination thereof.

After Rome, similar recipes spread to other European countries such as Germany and Sweden.  As immigrants made their way to America, they brought their recipes with them.  The Pennsylvania Dutch settlers of the 18th century made ‘scrapple’ as a way to use every bit of a slaughtered pig.  They simmered the meat with cornmeal and shaped it into a loaf after which they fried and sliced it.

The invention of the mechanical meat grinder in the nineteenth century by Karl Drais, advancements in refrigeration and a developing meat packing industry caused a ‘ground meat food revolution’ to occur in domestic kitchens of America.  Prior to this, cooks had to chop meat by hand in large wooden bowls using a curved blade which took considerable time and effort when preparing food on a large scale.  Allegedly, a 1906 grinder from the Enterprise Manufacturing Company of Philadelphia could process 1 ½ pounds of meat per minute for $1.75.  From this point on meatloaf started to appear in various American cookbooks.  According to the Oxford Companion to Food it was first mentioned in the US print in 1899.  Not long afterwards, two variations on a meatloaf type recipe appeared in ‘The Boston Cooking School Cookbook’.

From the very beginning there wasn’t a blueprint recipe for constructing the perfect meatloaf.  Maybe this is why its popularity is so mixed, based on the different experiences of those partaking.  However, the basic framework is consistent:  Ground meat, a filler (bread or cereal based), an egg or milk, and seasonings.  Jason Gaydos on All Recipes describes a family recipe dating back to 1807 using deer meat, onions, carrots and grated apple.  Another speaks of veal, ham and crushed crackers seasoned with nutmeg, mace, cayenne and lemon rind, while food historian Andrew Smith relates a ground beef and onion-based breakfast meatloaf recipe.

Meatloaf became a cheap source of food for Americans during the depression of the 1930’s and the wartime rationing of the 40’s.  It gained popularity because it was a way of making a protein-based food stretch further without incurring expense.  Goods like pre-packaged bread, crackers and oatmeal were good fillers that would bulk-up the meatloaf as well as provide the moisture it needed.  Prudence Penny packed her Vitality Loaf’ with beef, pork, pork liver, oatmeal, wheat germ, onion-evaporated milk, egg and chili sauce but some especially frugal recipes left out the meat altogether in favor of beans, nuts, rice and soy flour.

If meatloaf were a carousel ride it would be the grand rollercoaster of all time.  Where some recipes have retained their rustic charm or sophisticated elegance throughout the years, the mighty meatloaf has swooped up and down, alternating between the two.  Its homely beginnings in the 30’s and 40’s took on a completely different direction in the 50’s when kitchen appliances big and small started to appear in the American housewife’s kitchen.  Suddenly cooking became less labor intensive and more lighthearted and many appliances came with cookbooks to teach women how to use them.  This was good news for the meatloaf which received quite a bit of attention in terms of elaborate makeovers.  Some of these were rather dubious.  For example, a 1958 book, 365 Ways to Cook Hamburger, included 70 recipes for meatloaf, several of which went wild, advocating things like smashed bananas or ketchup-filled peach halves.

Then, in the 70’s and 80’s manufacturers of processed food began packaging an inexpensive ground meatloaf mix.  It comprised one third pork, one third veal and one third beef.  Accordingly, the dish regained its reputation for being a simple economical meal that entailed cheap and convenient food. Unfortunately, convenience came at a price with heavily processed food that was less nutritious than its original home-made version.  It was also a whole lot less healthy in terms of artificial additives and preservatives.  Household brands such as Stouffer’s, Hormel, Boston Market, Swanson and Marie Callender’s still compete for grocery store meatloaf sales.

On The Rise Again

The 1990’s brought moments that changed the way Americans thought of food.  In 1993 the TV Food Network launched which pioneered the idea of watching chefs prepare food as broadcast entertainment.  This popularization of meal preparation and all the quirks of the celebrity chefs attracted huge interest.   It prompted a kind of revolution in attitude toward cooking.  At the same time the Internet ‘happened’ and the sharing of online recipes began alongside cooking forums and food blogs.  Families discovered all kinds of cuisines that they had never seen before.  And, familiar meals like meatloaf were rethought and reinvented all over again.

I found recipes for an Athenian meatloaf made with ground lamb and cucumber yogurt sauce, a smoked beef meatloaf with barbecue glaze, and an olive tapenade meatloaf as three examples of loaves with very different flavors.  Certain restaurants serve incredibly ‘fancy’ versions such as ‘ricotta (cheese) with pecorino sauce, grape tomato and balsamic reduction’ (Eatery, Manhattan), or veal and mushroom with chili and chorizo. (Buckhead Diner, Atlanta).

Whatever your whim, there is bound to be a meatloaf that appeals to you.  The question is, which one of these versions will convert my husband from ‘yuck’ to ‘yum’?  In truth I already know the answer.  Last night I made my selection and served it blind without making a big deal nor announcing the title of the dish.  He was engrossed in a movie as I handed him his plate and I held my breath as he took his first bite.  I felt like a mom who had disguised a Brussel sprout deliberately inside a Ferrero Rocher chocolate truffle. I stood motionless in the kitchen until he finished his last bite.  Then, he turned to me and said: “That was good sweetie, what was it?” And I told him.

This was my happy ending and it can be yours too!  If  you have somebody in your family who won’t eat meatloaf we have the answer!  Healthy Gourmet’s incredible Mighty Meatloaf will knock the socks off any other frozen variety in the stores.  Made with all natural ingredients, satisfy your hunger with fresh beef, homemade ketchup, rosemary roast potatoes and green beans for only 450 calories.  I can almost guarantee that it will be a game changer.  Bon appetit!