Teriyaki, Yakitori and Sukiyaki: The Three Sisters of Japanese Cuisine 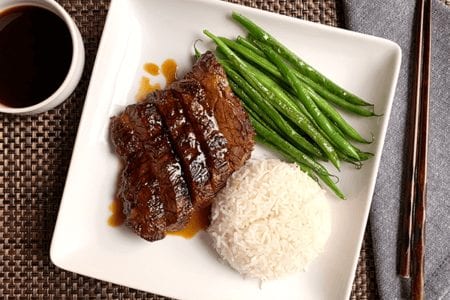 You have probably heard of Teriyaki without being an aficionado of Japanese food.  It is on the shelves of almost every mainstream grocery store across the United States.  It shows up in marinades, seasonings and prepared food and you will be hard pressed to find a Japanese restaurant that doesn’t have it on the menu.  But Yakitori and Sukiyaki are a different story.  You might call them Teriyaki’s lesser known siblings.  The quiet ones.  And it’s kind of surprising because in Japan, there is apparently no official teriyaki sauce history.

Like the Mexican burrito or Chinese chop suey, immigrants invented teriyaki, wishing to replicate the dishes they prepared at home.  The term teriyaki doesn’t appear on authentic Japanese menus in Japan; it is virgin Hawaiian-Japanese fusion cuisine.

The history of teriyaki sauce can be traced back to early Japanese immigrants who settled in Hawaii in the 1960’s.  They created a distinctive marinade using local products like pineapple juice, which they blended with soy sauce. Eventually, the sauce that most people call teriyaki was born.  The word teriyaki derives from the noun teri or glaze (照り), which refers to a shine or luster given by the sugar content in the tare (タレ), and yaki (焼き), which refers to the cooking method of grilling or broiling.

Essentially teriyaki sauce is made by mixing and heating three ingredients: sugar, soy sauce, and sake (or mirin).  Mirin is a Japanese rice wine, similar to sake, but with more sugar and a lower alcohol content of 14%. However, there are many versions of teriyaki sauce, which include the addition of garlic, ginger, cornstarch, honey, vinegar, and red pepper flakes.  Teriyaki sauce is appealing to many because of its simplicity and the way it makes food look even more appetizing. The mirin or sake, along with the caramelization of the sugar, is what gives the teriyaki sauce its luster and shine.

Yakitori is a Japanese type of skewered chicken. Its preparation involves skewering the meat with kushi, a type of skewer typically made of steel, bamboo, or similar materials (kushi (串) refers to the skewers). Afterwards, they are grilled over a charcoal fire. During or after cooking, the meat is typically seasoned with tare (dipping sauces) or salt.

Tare is a general term in Japanese cuisine for dipping sauces often used in grilling as well as with sushi, nabemono (a simmering soup pot) and gyoza (餃子 meat and vegetable dumplings). The typical gyoza filling consists of ground pork, nira chives, green onion, cabbage, ginger, garlic, soy sauce and sesame oil, but some creative gyoza shops have also come up with a range of other fillings.  It can also be used to make the soup for Ramen by combining it with stock and/or broth, in order to add to the complex combination of flavors, and as a braising liquid for meat.

Yakitori is one of the most popular dishes in Japan, as well as abroad. Subject to many re-interpretations depending on the region, it is a relatively recent mainstay of Japanese cuisine.  The dish as we know it today, started to appear in during the middle of the Meiji Era (1868 to 1912).  This was a time when chicken were bred in larger numbers for food. In urban areas across Japan, yatai (street stalls) began serving skewered chicken grilled over charcoal. It was thought that the smoky flavor from the charcoal — as well as the salty-sweet sauce brushed on after cooking — would offset the odoriferous nature of the burning meat.

Sukiyaki is a Japanese dish that is prepared and served in the nabemono style. It consists of meat which is slowly cooked or simmered at the table, alongside vegetables and other ingredients, in a shallow iron pot in a mixture of soy sauce, sugar, and mirin.  Nabemono (鍋物, なべ物, nabe “cooking pot” + “thing”), or simply nabe, is a variety of Japanese hot pot dishes, also known as one pot dishes and “things in a pot”. it can be a mixture of fresh vegetables, meat, seafood, tofu, and soybean products, or seasonal ingredients, all to be cooked in a simmering soup broth in a pot.

Sukiyaki is a stewlike meal prepared tableside in a cast-iron “nabemono” or “Japanese hot pot”.  In Japan sukiyaki is referred to as “the friendship dish” because it appeals to foreigners.  It consists of “suki”, “thin strips” of beef, vegetables and noodles or tofu. It’s flavored with soy sauce, dashi (broth), mirin, sake and sugar. Before eating, each bite is dipped into beaten egg. Sukiyaki fits into the “yaki” or “grilled” category because the meat is grilled in the pan prior to adding the other ingredients.

There are a number of stories about the origin of sukiyaki. One story involves a nobleman in medieval times who stopped at a peasant’s hut after a hunting trip. The nobleman ordered the peasant to cook his game but the peasant realized that his cooking utensils were not suitable for a noble. He cleaned his suki, or spade, and broiled (yaki) the meat on it.

Feeling in the mood for Japanese?  Try EatFlavorly’s delicious Teriyaki Steak.  Savory and slightly sweet with a hint of ginger, our scratch-made Japanese teriyaki sauce is a perfect accompaniment to seared sirloin steak. Served with fragrant jasmine rice and roasted green beans. EatFlavorly is located in Houston and we are primed for same day local frozen meal delivery.