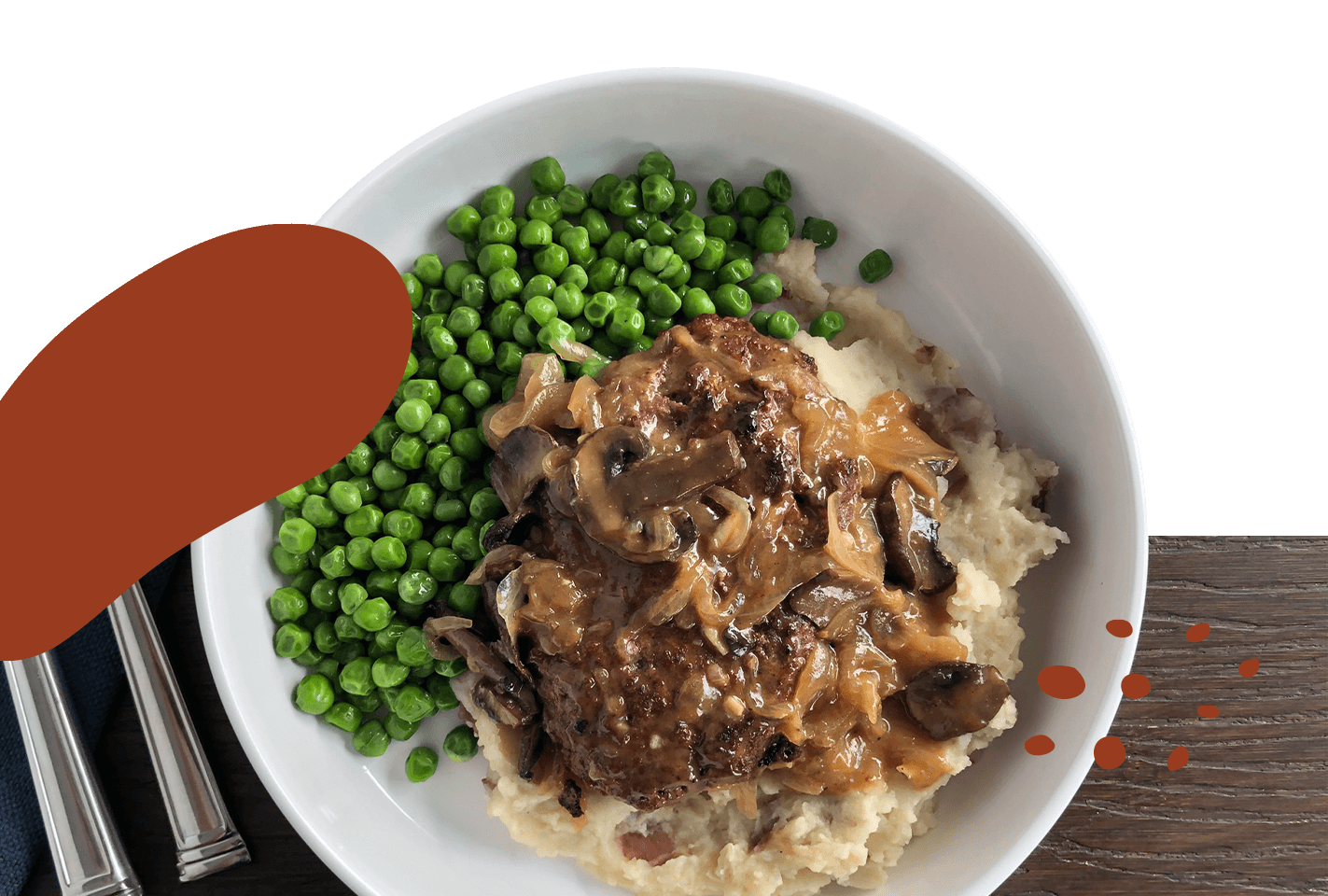 Every recipe tells a story.  It is a culinary imprint in time; a piece of history that reveals the who, the why, the when and the where of its creation.  What is its origin and how did it come into being?  Salisbury Steak is one of America’s classic homestyle meals, and often appears on the household menu in the form of a TV dinner.  However, its plain appearance belies its fascinating history.  Salisbury steak is, in fact, America’s original health food, and by design not by accident.

Typical fare during the Civil War was very basic. Union soldiers were fed pork or beef, usually salted and boiled to extend its shelf life.  They also had coffee, sugar, salt, vinegar, and sometimes dried fruits and vegetables if they were in season. Hard tack, a type of biscuit made from unleavened flour and water, was commonly used to stave off hunger on both sides. After baking, hard tack was dried to increase its shelf life.  Many men still suffered from hunger, illness and death from unsanitary and poorly cooked food.

Digestive illnesses killed more soldiers during the Civil War than combat and a diet rich in beefsteak and coffee was a suggested cure.  Dr. James Henry Salisbury, born near Cortland, New York, was an early pioneer of germ theory, and of diet being a factor in health. He tested his theories during the Civil War, treating chronic diarrhea among Union soldiers with a diet of chopped-up meat and little else. Salisbury believed that the problem with the soldiers’ health was an “amylaceous, army biscuit diet,” with not enough variety or nutrients.

For Salisbury, minced beef patties were health food and he referred to them as “muscle pulp of beef”.  After years of research, he published his 1888 book, The Relation of Alimentation and Disease. The supposed low-carb, weight loss beef recipe appears in several sections of the book.  In his chapter “Drinks, Food, Baths, Exercise and Clothing Advisable in Consumption,” Dr. Salisbury explained the health benefits of the original Salisbury Steak:  “Eat the muscle pulp of lean beef made into cakes and broiled. This pulp should be as free as possible from connective or glue tissue, fat and cartilage…previous to chopping, the fat, bones, tendons and fasciae should all be cut away, and the lean muscle cut up in pieces of one to two inch squares.”

Vegetables are The Enemy

To Dr Salisbury, the enemies, believe it or not, were fresh fruit and vegetables. When over-consumed “at the expense of more substantial aliments,” he wrote, these led to “…complaints” in children.  After 30 years of research he finally published his ideas, setting off one of the earliest American fad diets.  While some of his ideas may be outmoded today, such as his belief that vegetables released powerful toxins in the digestive system, his affection for beefsteak and his promotion of its positive effect on health, has persisted.

The 1904 Cookbook of the United States Navy

The original Salisbury Steak recipe called for broiled meat patties served with Worcester sauce, mustard, horseradish, or lemon juice.  In the following decade, the recipe began to gain popularity and started to appear in Navy Cookbooks. The 1904 Cookbook of the United States Navy lists the dish as a “Hamburger Steak.” The majority of staple ingredients, several added from the original simplicity of Dr Salisbury, remain unchanged over the years:  Ground beef, breadcrumbs, onions, salt, and pepper. Unlike the original recipe, the one included in the 1904 cookbook called for a gravy made from the beef fat, water, flour, and tomato sauce. Once incorporated and thickened, the gravy was spread atop the griddle patties. This is the more familiar modern interpretation of the classic dish.

The recipe remained relatively unchanged in Navy cookbooks over the years, besides the name. The common saying was that “hamburger steak” sounded too German for Americans during WWI.  This prompted people to call it by its originator, hence “Salisbury Steak” became synonymous with a bun-less hamburger.

Salisbury steak as a product, can be a mix of different proteins.  Per the United States Department of Agriculture standards, Salisbury steak must have a minimum meat content of 65% although up to 25% can be pork.   No more than 30% of the Salisbury steak can be fat.  Extenders or fillers can feature in Salisbury steak, which also help to reduce the cooking time in this fast-prep protein.  However, meat by-products are not permitted.  Fillers may include bread crumbs, flour or oat flakes, but the limit for approved fillers is not to exceed 12% of the product volume. Soy proteins must not exceed 6.8% by finished product volume.

Proprietary blends depend on the manufacturer, and that is why flavor is can vary so much.   Special seasonings, and the addition of fresh vegetables such as onion, mushrooms or sweet peppers may be added.  Additionally you may find binding ingredients such as eggs, cream, buttermilk, water, vinegar or brine.

To be Salisbury steak, the product must be completely cooked.   And it is not a “hamburger pattie” if it contains a blend of animal proteins and fats.  So, while you may think a Salisbury steak is just a burger with gravy on it, there is a distinctly different recipe and food standards behind it.

As you stand in front of the freezer looking at the various TV dinners on display you may ask yourself what is the difference between meatloaf and Salisbury steak?  Good question.

The good news is that you don’t have to choose between Meatloaf or Salisbury steak because Healthy Gourmet has both!  Check out our latest menu and place your order while stocks last.

PrevPreviousTeriyaki, Yakitori and Sukiyaki: The Three Sisters of Japanese Cuisine
NextFilipino Cuisine Steps into the LimelightNext