Orange Vegetables – An Ode to Butternut Squash and Sweet Potatoes 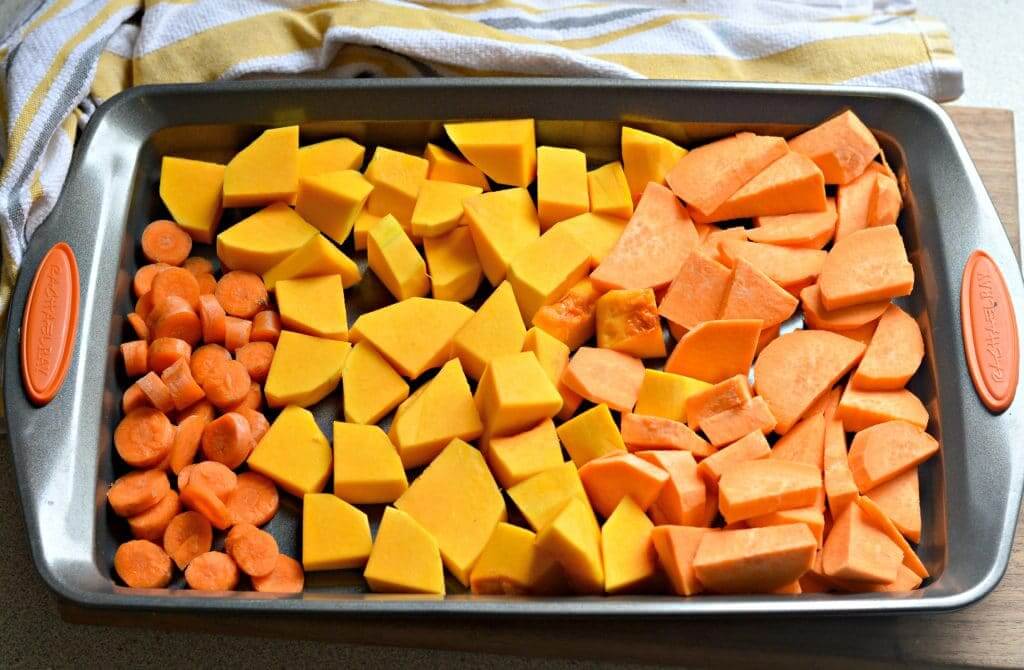 My least favorite color in the entire world is orange. To begin with, it screams headaches, 1970’s décor and spray cheese.  It means fake suntans, unbrushed Cheeto teeth and Hobby Lobby for three dismal months of the year.  It’s Easy Jet when you wanted United Airlines.  It’s Fanta when you need a Coke.   It’s Mastercard when they only take Visa.  I know no one and nothing that looks good in man-made orange.  But I do like sunsets and vegetables.  Orange vegetables get a carte blanch in my house.  A Get Out of Jail Free Card.  A Pass Go and Collect $200 status.  In truth, orange vegetables are the bomb.  Quite honestly, I can’t get enough of them and the best part is, they’re incredibly good for you.

This blog is dedicated to two rival orange vegetables that are almost guaranteed to make an appearance on your menu in some form or other this Thanksgiving.  I am referring to the nutritional powerhouse fruit butternut squash and the sweet potato.

Orange foods, especially carrots, are most commonly associated with beta-carotene. In fact, the name carotene is derived from the Latin word for carrot, carota. Beta-carotene is an antioxidant that actually helps your body make vitamin A which is important for healthy eyes and skin.

While carrots are one of the best sources of beta-carotene, there are plenty of other orange vegetables and fruits rich in beta-carotene including squash, pumpkins, sweet potatoes, orange bell peppers, apricots, cantaloupe and papaya. Beyond beta-carotene, most deep orange or yellow-colored vegetables are also filled with vitamin C, which helps support your immune function, and are high in fiber.

Although botanically a fruit, butternut squash is usually prepared as a vegetable that can be roasted, sautéed, toasted, puréed for soups such as squash soup, or mashed to be used in casseroles, breads, muffins, and pies. In Flavorly’s Big Turkey Dinner we present it roasted with other sides, alongside all-natural turkey breast, carved and smothered in our scratch-made turkey gravy.

Research suggests that diets high in antioxidants found in butternut squash can reduce risk of certain cancers. In support of this, a meta analysis of 18 studies showed that a high level of antioxidant intake (including Vitamins C and b-carotene) was associated with a significantly decreased risk of pancreatic cancer.   The good news doesn’t stop here.   The antioxidants and potassium found in butternut squash may also protect against cognitive decline, high blood pressure, inflammation, high cholesterol, hypertension and obesity.

Most of us assume sweet potatoes have orange flesh but not all do.  While the typical sweet potato we see in the grocery store is orange, there are also white and purple varieties.  But wait…aren’t we actually talking about Yams?  This is so confusing.  Yes and no.  In fact, candied yams are not really yams. In America, the term “yam” is used to denote a softer variety of sweet potato. But a true yam, common in Caribbean and West African cooking, is similar to yucca in texture and flavor.  It is a drier, starchier root with a tough brown skin and is native to Africa and Asia. On the other hand, the sweet potato we see on holiday buffets originated in South America.

Sweet potatoes and yams often look identical, but to begin with the price give a clue.  Yams can be as low as 79 cents per pound, while sweet potatoes cost $2.49 per pound.  But what’s the botanical difference between a sweet potato and a yam? At most grocery stores, absolutely nothing; it’s a façade.  Most of the so-called yams you see in American grocery stores are actually orange-fleshed sweet potatoes.  The reason for the name mix-up, is allegedly because Louisiana sweet potato growers marketed their orange-fleshed as “yams” to distinguish from other states’ produce in the 1930s – and the habit stuck.

Sweet potatoes have been popular in the American South since colonial times, when slaves who worked in plantation fields and kitchens mistook them for the yams they knew in their homelands. “The tropical region of Nigeria, the Ivory Coast, and West Africa is called the ‘yam belt,'” said Frederick Opie, Ph.D., Professor of History and Society at Babson College in Boston. “When Africans came to the new world as enslaved people, they substituted sweet potatoes for yams.”

The Southern classic of sweet potato pudding or “pone” was popular as either a side dish or dessert, and by the end of the Civil War, appreciation of the orange tubers had migrated to the North. Sweet potato pie was first mentioned in an 1887 issue of Godey’s Lady’s Book, a Philadelphia women’s magazine edited by an ahead-of-her-time woman named Sarah Josepha Hale (who also wrote “Mary Had a Little Lamb” and is generally considered to be “the godmother of Thanksgiving” because she lobbied government officials to have it declared a national holiday).

A short while later, candied sweet potatoes appeared in the first edition of the “Boston Cooking School Cookbook” in 1896.  Then in 1917, a company called Angelus Marshmallows distributed a booklet of recipes that utilized the frothy white puffs, and a classic culinary marriage began.  A 1929 cookbook called “Vital Vegetables” is considered the first to include a recipe for the dish — ideal timing since the ingredients were cheap during the Depression era in America.

In conclusion, it’s easy to see why they’re both champs in the food pyramid.  To begin with, the butternut squash beats the sweet potato with fewer calories, carbs and sugar per serving.  Moreover, it is rich in calcium, magnesium, potassium, and vitamins B6 and E.  On the other hand, the sweet potato, however, provides more fiber and protein. While they have their differences, in addition the two vegetables are both low in sodium and rich in vitamin C. Sounds like it’s finally time to get cooking!  So which one will you be dishing up this Thanksgiving?