Jamaican Jerk! The Caribbean is Calling! 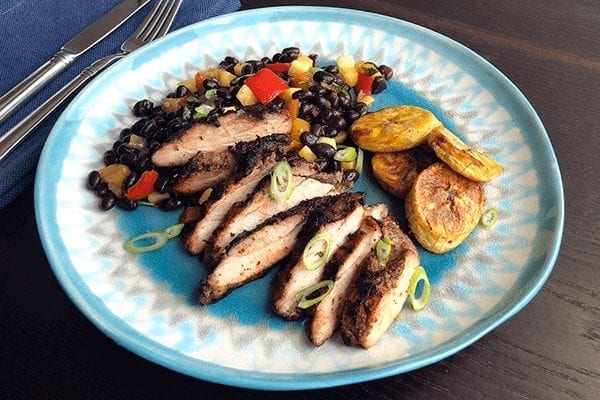 Jamaican Jerk, is an aromatic grilled-meat dish mostly associated with Jamaica but common throughout the Caribbean. Jerk refers to a style of cooking in which the main ingredient – often chicken but sometimes other meat, seafood or vegetables – is coated in spices, poked with holes to distribute the marinade and slow-cooked over a fire or grill. Traditionally the firewood is green pimento wood positioned over burning coals and the resulting smoke is key to the flavor of the dish.

What does ‘Jerk’ mean?

Food historians tell us that “Jerk” is a Spanish word from the Peruvian “Charqui” meaning dried strips of meat.  Hence the term “Jerky”.  The word started as a noun and then became a verb meaning “to poke holes” in the meat so the spices could permeate it.

Jerk cooking experts like native Jamaican and author Helen Willinsky of “Jerk from Jamaica” speculate about the meaning of the name Jerk.  It could have come from the turning of the meat in the marinade or from the way some people jerk a strip from the roast on the BBQ. We may never know for sure.

Where did Jamaican Jerk cooking originate?

Most historians agree that Arawak Indians from South America settled in Jamaica over 2500 years ago . They used similar techniques to smoke and dry meat in the sun or over a slow fire and this was common practice in their indigenous land, Peru. Smoking and drying meat was important so they could take it on journeys and consume as-is or chop it and reconstitute it in boiling water.

What are the key ingredients?

Jerk is a complex blend of seasonings including scallions, onions, scotch bonnet peppers, salt, garlic, allspice, black pepper and many other spices. all of ingredients grow on the island’s fertile green landscape.

A wetter marinade calls for oil, vinegar and lime juice, while some people also stir through fruit juice such as orange or mango.

Allspice, has an interesting history and is sometimes a misunderstood term.  It doesn’t refer to a blend of spices but rather to a singular tree – a tropical evergreen tree (Pimenta diocia, formerly P. officinalis) of the myrtle family (Myrtaceae).  It is native to the West Indies and Central America and valued for its berries, the source of a highly aromatic spice.

Allspice was so named because the flavor of the dried berry resembles a combination of cloves, cinnamon, and nutmeg. It is a popular baking ingredient and is usually present in mincemeat and mixed pickling spice. Early Spanish explorers, mistaking it for a type of pepper, called it pimenta, hence its botanical name and such terms as pimento and Jamaica pepper. The first record of its import to Europe is from 1601.

A plantain to the untrained eye could easily be mistaken for a large banana. It belongs to Musaceae, the banana family of plants, and it’s closely related to the common banana. Believed to be native to Southeast Asia, plantains grow in tropical regions around the world.  They appear in a variety of cuisines, in slices, and are good to eat in this way at every stage of ripeness.

Unripe plantains are green to yellow, difficult to peel, and the fruit is hard with a starchy flavor.  This is the perfect stage for boiling and frying them. When fully ripe, plantains are black, with a flavor similar to a banana but less sweet. Most people prefer them cooked even at this stage.  Curious about what a plantain tastes like?  Try Healthy Gourmet’s Jamaican Jerk Chicken.

The legendary Mecca for Jerk is Boston beach on the northeastern end of Jamaica.  Here, most of the vendors have built huts over fires on the beach like the inhabitants that came before them.

They cook the meat on pimento wood or sheets of metal used (griddles) sometimes covered with plantain leaves. The typical cooking style uses a marinade or paste that includes pimento (allspice) and scotch bonnet peppers, similar to habanero. The meat then marinades and slow smokes over pimento wood.

Jerk “huts” are all over the Caribbean islands and you can find them by the lovely smell. Often they are octagonal or circular shacks and wrap around a telephone pole to support the thatched roof. Dining is outside, as well as the cooking of the food.

Is your mouth watering yet?  Don’t delay – try our delicious Jamaican Jerk Chicken prepared meal, inspired by flavors from the Caribbean islands.