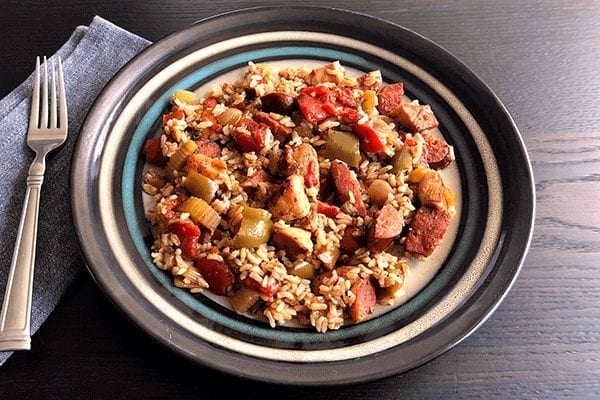 Jambalaya is a comforting and filling rice dish that originates from the French quarter of New Orleans.  Each region has slightly different variations that include a vast range of meats and seafood prepared with rice, vegetables and spices in the same pot.  It is easy to make in large batches and a crowd pleaser at large events.  You will often see it at music festivals, tailgate parties, church fairs, weddings, political rallies and sporting events.  It is easy to serve a large family gatherings and make a simple week night meal that can be adapted depending on who is at the table.

The most common ingredients of Jambalaya are chicken and smoked sausage, but you might find turkey, boar, shrimp, venison, alligator, oysters, duck or crawfish on your plate depending on the preferences of the chef and the culinary region.  And you may or may not find tomatoes, depending on whether the recipe is Cajun or Creole.  Jambalaya is incredibly versatile and easily adapts to use up whatever ingredients you may have in the kitchen.  Cooks can scale up or down the cost depending on their choice of meat and seafood.

There are as many different versions of this recipe as there are people who make it, but one big difference, which is related to geography, is its color. You are more likely to find red jambalaya in New Orleans and brown in the rural parts of south Louisiana.

The difference is tomatoes, an ingredient that would have been hard to come by in Cajun country, whereas the Port of New Orleans gave city dwellers access to a wider range of ingredients and a palate that adjusted to fresh produce like tomatoes.  A Cajun roux is traditionally made using lard/oil and flour, whereas Creole is made using butter.

Creole jambalaya was first cooked in and around New Orleans and uses tomatoes. The ‘holy trinity’ of onions (50%), peppers (25%) and celery (25%) cook with the meat, then the tomatoes, stock and rice combine. Everything rises to the boil before simmering until the rice absorbs all the stock. The dish is left with a red hue because of the tomatoes, and this is why the Creole version is sometimes called ‘red jambalaya’.

Cajun jambalaya was first cooked in the rural parts of Louisiana and does not use tomatoes. In this recipe the meat cooks first on its own until it caramelizes, then the trinity of vegetables follows, and finally the stock and rice. Cajun jambalaya usually has a brown color due to the meat dissolving in the broth. It also has a smokier flavor because the meat browns first in a cast-iron cookpot. This recipe is characteristic of southwestern and south-central Louisiana.

Is it the same as Gumbo and Etouffee?

Jambalaya is similar but not identical to gumbo and etouffee, because the rice in these dishes is cooked separately and presented on the plate as a ‘side’. On the other hand, the rice of a jambalaya is combined with the meat and vegetables while cooking:  It absorbs the flavor of the broth infused with the rich stock.  The flavors of all three dishes are very similar but their contrasting levels of dryness and use of rice makes for a very different eating experience.

Gumbo resembles a soup and uses similar meat, vegetables and seasonings to jambalaya but includes filé powder (a spicy herb from the Sassafras tree) and okra, which are not common in jambalaya.   Étouffée is a stew which always includes shellfish such as shrimp or crayfish and omits the sausage common to jambalaya and gumbo.  Jambalaya is almost considered a training ground for those learning to make gumbo and etouffee, both of which are more difficult to perfect.

What’s the best rice to use?

Most people use long-grain white rice, but you can make a first-rate jambalaya with jasmine, Arborio, or brown rice.  Some like to use parboiled rice, which yields jambalaya with distinct grains of rice and less risk of overcooked or mushy rice. But for others that slightly mushy jambalaya rice is exactly what they want!

What does ‘Jambalaya’ Mean?

Another suggestion, put forward by Andrew Sigal (a culinary historian), is that ‘jambalaya’ is based on the Provençal word ‘jambalaia’.  This seems to have first appeared in a French-Provençal dictionary in 1878. The definition described it as being a mixup – much like the ingredients in the recipe.

The Native American Atakapa tribe claims the word originates from the phrase “Sham, pal ha! Ya!” meaning “Be full, not skinny! Eat Up!” their equivalent of the French “Bon appétit!”.  Spanish influences transformed this phrase into  ‘jambalaya’.

Where did jambalaya come from?

The exact origins of jambalaya are unknown.  However, speculation is that it is the result of a variety of ethnicities mixing in the port of New Orleans. The dish has influences of Spanish, French, African, Native American and Caribbean cooking styles and produce. Perhaps the most obvious of these is Spanish, due to the dish’s similarity to paella, brought to New Orleans by foreign explorers.

In the case of Creole jambalaya, Spanish cooks may have added tomatoes as a substitute for saffron.  Saffron is a spice present in paella and it was not readily available due to import costs. The French probably added spices brought from the Caribbean while Cajun cooks used meat caught in the bayous.

A need for filling but inexpensive meals with easily available ingredients led to the creation of jambalaya. It first became popular at church fairs which were the biggest public gatherings at the time.  Then, in 1878 it appeared in a cookbook (The Gulf City Cook Book) as a recipe titled ‘Jam Bolaya’.  After the turn of the century jambalaya saw a surge in popularity during the 1930’s during the economic downturn.

Jambalaya Capital of the World

In 1968, Louisiana Governor John J. McKeithen proclaimed Gonzales, Louisiana, “the Jambalaya capital of the world”. Every spring, the annual Jambalaya Festival is held in Gonzales, a city proclaimed ‘Jambalaya capital of the world’ by the Governor of Louisiana in 1968. Cooks from across the region take part in the annual contest to win prizes for the dish they have spent years perfecting. Today, the dish is still a firm favorite in Louisiana and remains a big part of social gatherings.

Healthy Gourmet’s take on jambalaya includes andouille sausage, chicken and brown rice flavored with Creole herbs and spices.  These are prepared with the holy trinity of onions, celery and bell peppers and added to a carefully prepared chocolate brown roux.  Chunky tomatoes complete the picture.  Delicious!

PrevPreviousJamaican Jerk! The Caribbean is Calling!
NextFather’s Day: A National Holiday that Took its TimeNext