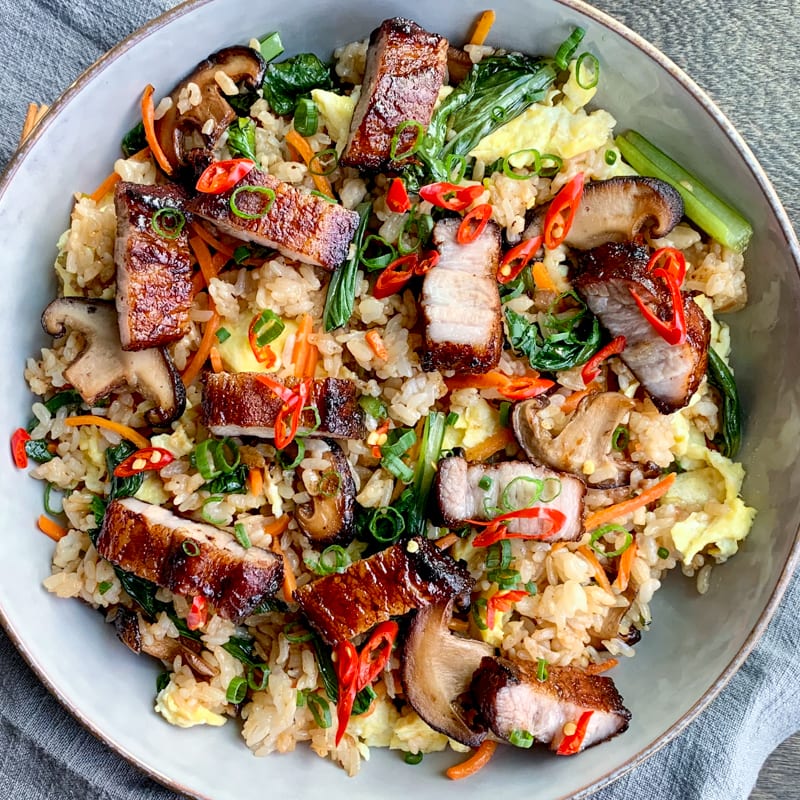 Char siu is a popular way to flavor and prepare barbecue pork in Cantonese cuisine involving strips of seasoned pork basted in a sweet red sticky glaze before cooking.

Cantonese or Yue cuisine originates from Guangdong Province (SE China around Hong Kong), and it is the most popular style of Chinese cuisine in the world. This is because most of the Chinese who immigrated and set up restaurants overseas were from Guangdong. What distinguishes Cantonese food is fresh vegetables and meat, and sweet sauces.

Char siu literally means “fork roasted” (siu being burn/roast and cha being fork, both noun and verb). The traditional cooking method for the dish involves first seasoning strips of boneless pork with a sweet, savory glaze. Then you skewer them with long forks and place them in a covered oven or over a fire. Char siu is suitable for many cuts of pork. This can include neck meat, pork belly, pork butt, and just about any boneless cut of pork – leaner cuts are ideal.

How to season it

In ancient times, wild boar and other available meats were available to make char siu. However, in modern times, the meat is typically a shoulder cut of domestic pork, with a mixture of honey, five-spice powder, red fermented bean curd, dark soy sauce, hoisin sauce, optional red food coloring and sherry or rice wine. These seasonings turn the exterior layer of the meat dark red, similar to the “smoke ring” of American barbecues. Maltose may give char siu its characteristic shiny glaze.

What to serve it with

Char siu typically comes with a starch, whether inside a bun (chasiu baau), with noodles (chasiu min), or with rice (chasiu faan) in fast food establishments, or as a centerpiece main dish in traditional family dining establishments. Outside of a restaurant, char sui usually finds its way home as an ingredient in various complex entrees.

Legend has it that this simple snack was invented by one of the greatest minds in Chinese history, Zhuge Liang, the celebrated Chinese military strategist during the Three Kingdoms period in the third century. During one fateful campaign, he was told that the only way to guarantee safe passage across a river was to behead 50 of his men. Instead, he tricked his opponents by creating gigantic steamed buns and throwing down the river so they looked like bobbing heads. And so mantou – the pillowy steamed bun – was born.

Cantonese cuisine, also called Yue cuisine or Guangdong cuisine is one of the eight major cuisines with a long history of about 2,000 years. Its dishes taste mild, fresh and natural. The most famous dishes include for example white Cut Chicken, Cantonese Roasted Goose and Roasted Suckling Pig.

If you visit Chinese restaurants from time to time, you may be familiar with white cut chicken. Poaching is the cooking method. White refers to the plain color indicating that there are no special seasonings. Although white cut chicken is a simple recipe it lives up to the mantra of traditional Cantonese cuisine – mild, fresh and natural.