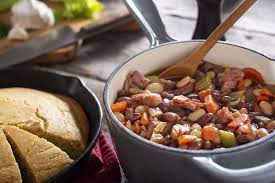 We don’t usually go anywhere over Spring break but this year we decided to take a last minute trip. There were a few criteria that had to be met – price, distance and a destination that would be a first for all three of us. So we settled on the Tennessee Smoky Mountains, a $200 round trip from Houston and under an hour’s drive from Knoxville airport. At the back of my mind was also a vague idea that I would enjoy sampling some local Appalachian cuisine…and inevitably writing about it.

What is the Appalachian Region?

First of all, what and where is the Appalachian Region? As defined by the Appalachian Regional Commission, it includes all of West Virginia and parts of 12 other states including: Alabama, Georgia, Kentucky, Maryland, Mississippi, New York, North Carolina, Pennsylvania, South Carolina, Tennessee and Virginia. The region extends more than 1,000 miles and is home to more than 25 million people. The expansive territory and pockets of cultural influence give rise to a variety of foodways and traditions.

Due to the many different regions that collectively share the same basic landscape, but have contrasting histories, climates and industries, it is hard to pinpoint what defines Appalachian cuisine. While there are regional variations in food, there are also themes that bring together the different communities.

One theme is ‘making do with’ what is available and finding ways to make it last. Throughout history, remote mountain living made survival dependent on what could be sourced locally. Consequently it was common for domestic dwellings to have outbuildings designed to house chickens, fatten hogs and store apples, while meat was cured or smoked and supplies were kept cool in streams flowing through the property.

Another theme is making sure the food would sustain you through a long day of work, whether you were working on a farm or in a mine.. Work was laborious and days were long, so food needed to provide enough energy to last the day. This often translated into recipes with a high fat or protein content. It followed that corn bread, vegetables with bacon fat, biscuits and gravy, hearty stews, rabbit pies, chicken and dumplings and apple desserts became typical Appalachian foods.

Appalachian cuisine is a true amalgamation of influences from different waves of settlement including Native American Cherokee, German, Italian and African American. One of Appalachia’s most iconic dishes, soup beans and cornbread, is a filling, soulful inheritance from Native Americans. Native Americans knew that growing corn, beans, and squash together (the “three sisters”) worked because of their symbiotic relationship. Corn removes nitrogen from the soil, and beans replace it. Cornstalks provide a natural trellis for the bean plants to climb on while low-growing squash plants create shade and hold in moisture.

The ramp is another Appalachian treasure revered by the Cherokees, who foraged for this wild mountain leek in the springtime for generations. Because of their pungent taste, ramps were ‘to get the blood flowing again’ and to “thin” the blood after a winter of inactivity. Festivals throughout the Appalachian Mountains pay tribute to ramps, and white-tablecloth chefs nationwide pay top dollar to acquire them in the spring.

Some describe Appalachian cuisine as a subset of soulful Southern cuisine: Why? Because it is simple and very rustic at heart. The Appalachian region also has a strong history of preserving foods, like canning, curing, smoking, and salting due to lack of resources in remote locations. Since there is no coastline near the mountains, a lot of the proteins rely upon game meat and freshwater fish. It is about seasonality in Tennessee and Western North Carolina.

There are a few key differences between Appalachian cuisine and Southern cuisine however. Sugarcane, which grows well in most of the South, cannot grow in Appalachia. As a result, traditional Appalachian desserts and sweets often use sorghum, honey, or maple syrup instead of cane sugar. A few other common American staples, such as rice and seafood, rarely appear in Appalachian recipes. This is because for a long time these ingredients were difficult for people living in the mountains to obtain.

As mentioned, the most important consideration concerning ingredients is topography and what is available in the area. For example, pawpaws, squirrel, pike, morel mushrooms, black walnuts, corn, beans and wild greens are common. Corn was abundant in Appalachian life be it on the cob, fried, creamed, grits, cornbread, hominy or even moonshine. Apples were multi functional as well.

Pork is a key ingredient. “In our area, we primarily ate what we grew in our gardens, and our meat came from our farm,” said Elaine Irwin Meyer, president of the Museum of Appalachia. “Most folks had hogs, so pork was abundant. We would can our sausage, hang our hams in the smokehouse to cure and use the fat to season our vegetables. It has been said that the only part of the hog that was not used was the squeal!”

Karen Dill shares some traditional Appalachian mountain recipes that she enjoyed with her family growing up. All of them illustrate the way in which pork flavored the main dish. In one recipe she describes boiled pinto beans flavored with streaked meat, garlic cloves and jalapeno. In another she speaks about collard greens flavored with bacon slices, red pepper flakes, vinegar and sugar. A third recipe calls for making buttermilk cornbread with a handful of chitlins or pork skins for flavoring. In addition (not pork related) she recalls how butter, molasses or honey slathered cornbread and biscuits for extra energy and taste.

Appalachian food has been sustainable and organic for generations offering “farm to table” fare before it became fashionable. As appealing as it sounds I am grateful for modern day conveniences like Flavorly. Why not check out the latest additions to our menu and place an order while stocks last?

PrevPreviousSpanish Tortilla and The Camino de Santiago
NextWhat is The Mediterranean Diet?Next