Can only the pure in heart make a good soup? 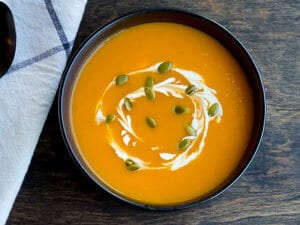 “Only the pure in heart can make a good soup” according to famous composer Ludwig Van Beethoven.  As outlandish as this statement appears at first sight, maybe there’s a grain of truth.  Because I think what he was trying to say is that anyone can make a good soup if they try hard enough.  A good soup doesn’t depend on precise measurement and exact timings.  It just needs a large pot, a handful of ingredients and a little devotion to the cause.

What’s the difference between soup and stew? On the most basic level there is no difference. Like ancient pottage, both descend from cheap and easy, healthy and locally sourced family feeds. Throughout time, these two interrelated menu items converge and diverge. However the test is not in the ingredients or method, but at which point it appears in the meal. Soup is starter or accompaniment whereas stew is main course.

So what is a soup?

According to the Encyclopedia of Food Culture (2003) a soup is a flavorful broth. It may be thick and crystal clear like a consommé , voluptuously smooth and creamy like a creamed soup, or chunky with meat, fish, grains, and/or vegetables. A soup may be a first course to whet the appetite.  Or it may be a hearty meal in a bowl. The bottom line is that in order to be soup, it must be sufficiently liquid to require a spoon rather than knife and fork.

Historians tell us the history of soup is probably as old as the history of cooking. The act of combining various ingredients in a large pot to create a nutritious, filling, easily digested, simple to make and serve food was inevitable. This made it the perfect choice for both sedentary and traveling cultures, rich and poor, healthy people and invalids.

Soups were easily digested and were prescribed for invalids since ancient times. The modern restaurant industry allegedly began thanks to soup. Restoratifs (where the word “restaurant” comes from) in 18th century Paris were among the first to serve broth [Pot-au-feu], bouillion, and consommé. Classic French cuisine generated many of the soups we know today.

There are six or seven different types of soup in today’s modern kitchen. These types fall into two different categories: clear and thick. Clear soups include consommé, bouillon and broth. Examples of thick soups include bisque, cream, potage, puree and velouté.  The Campbell soup company provides an excellent description of each below.

Clear soups are delicate soups with no thickening agent in them. Consommé, a French clarified meat or fish broth, is a classic version of a clear soup.

Broth, or bouillon, is another common clear soup. Broths come in a variety of flavors, including chicken, turkey, beef, vegetable and mushroom. Contrary to perception, clear soups can be full of bold and distinct flavors. Good clear soups never taste watery.

Clear soup can offer a wide range of nutritional benefits while keeping your digestive tract clear. This is why it is so popular in hospitals or as food when you’re feeling under the weather.

Many cooks and writers treat bouillon and broth interchangeably. This is understandable because they are essentially the same thing.  In other words a soup from water in which bones, meat, fish or vegetables have been simmered.  Leave broth to simmer for long enough and the gelatin begins to thicken it, creating an intensely flavorful stock.

A consommé is made by adding a mixture of ground meats, together with mirepoix (a combination of carrots, celery, and onion), tomatoes, and egg whites into either bouillon or stock.  The secret to making a high-quality consommé is in the simmering. Simmering and stirring bring impurities to the surface, in addition to the presence of acid from the tomatoes.

Eventually, the solids begin to congeal at the surface of the liquid, forming a ‘raft’, which is caused by the proteins in the egg whites. The resulting concoction is a clear liquid that has either a rich amber or yellow color. It then carefully passes through a filter to ensure its purity and then the fat is skimmed from the surface.  This process is called ‘passing’.  Therefore consommé is classified as passed soup whereas bouillon and broth are unpassed.

Thick soups obtain their consistency using flour, cornstarch, cream, vegetables and other ingredients. Depending on how you thicken it, you can get different textures and flavors.  For example, a potage of boiled meat and vegetables results in a thick, mushy consistency. Conversely, a bisque is thickened with rice, which creates a smoother blend.

A bisque is a creamy, thick soup that includes shellfish. Bisque is a method of extracting flavor from imperfect crabs, lobsters and shrimp that are traditionally not good enough to send to market.  In an authentic bisque, the shells are ground to a fine paste and added to thicken the soup. Bisques are thickened with rice, which can either be strained out, leaving behind the starch or pureed during the final stages.

“Cream of…” soups come in a variety of flavors.  Cream soups are traditionally a basic roux thinned with cream or milk and combined with a broth of your preferred ingredient.  Typical flavors include cream of tomato, cream of mushroom and cream of chicken. The addition of cream creates a thick and satisfying meal that is extra filling.

Potage is a Medieval soup from Northern France. To make potage, you take a variety of vegetables that you grow together in your garden add some meat and then boil it all together with water to form a thick mush.

Similar to potage is pottage. Pottage is an even more ancient thick soup comprising boiling vegetables and grains. They typically boiled for several hours until the entire mixture took on a homogeneous texture and flavor.  This intentionally broke down complex starches to ensure the food was safe for consumption.

Cold soup is a special category which is served well chilled, in cups or bowls. The popularity of this has recently increased. Many soups that begin hot can change into a cold version by simply chilling them well and making minor alterations to the structure and flavor. For instance, many purees can be served chilled if they are made with little or no butter and thinned with cream after chilling.  Ingredients for cold soups are fruit and vegetables and interestingly some cold soups require cooking whereas others don’t.

Speciality soups contain unusual ingredients or unusual methods and can be thick or clear.  Examples include Singapore turtle, African peanut and Louisiana Gumbo.

There are also national soups which have specific ingredients and special cooking methods from the origin of the country.  Over time the rest of the world introduced these soups such as Hungarian goulash, minestrone and Japanese miso.

Finally, are you looking for some convenient yet fresh soup?  Head over to Flavorly and order some of our simple yet robust delicious curry butternut soup for only $6.95 per portion.  Can you figure out which category it belongs to?