The Sunday Roast: A Beef-eater Tradition 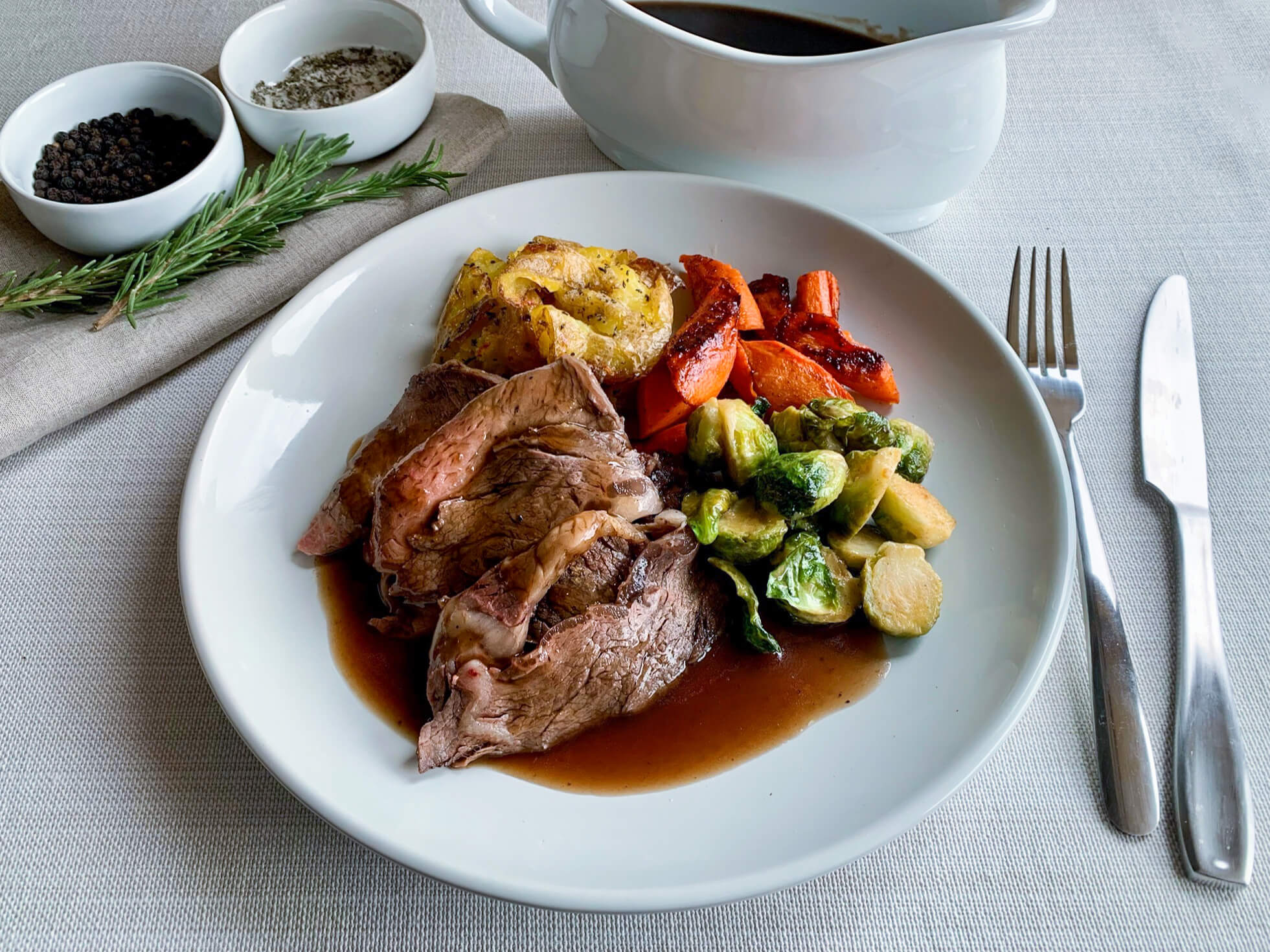 One of the things I miss most about British eating habits is the Sunday roast.  In some ways it looks like one of the easiest meals to prepare – no complicated sauces, no special seasonings to worry about.  On the other hand, it is one of the most difficult because it requires careful timing of the main event (the roast meat) while several side dishes cook to perfection so they are ready to serve simultaneously.  In addition, it is annoyingly easy to overcook the green vegetables, create soggy roast potatoes and bake Yorkshire puddings that fail to rise.  Why on earth would anyone want to go to such trouble?  The answer is because practice makes perfect and the end result is spectacular!

Sunday roasts can involve any kind of meat but the tradition began with beef.  The history of roast beef dates back to the reign of King Henry VII in 1485.  At that time, Henry’s royal bodyguards, otherwise known as ‘Yeoman of the Guard’, received part of their salary in chunks of beef.  This practice took place right up until the 1800s and allegedly these wardens subsequently earned the title ‘beef-eaters’.  Interestingly the name beefeater also relates to the French word ‘Buffetier’ who were the French King’s palace guards.

The story goes that King Henry’s guards started the Sunday roast beef tradition by cooking the meat (usually fillet, sirloin or shoulder) in the morning before going to Mass. The practice became a habit during the 19th century.  Women would leave the meat to cook in their village baker’s oven, which closed on Sunday, and pick it up when back from church, perfectly roasted.

Eating beef was reinforced by a tradition outlined in William Kitchiner’s 1871 volume “Apicius Redivivus: Or, The Cook’s Oracle”.  In his book, the author recommends eating about 3 kilos of meat per week to stay healthy.  This underlined the central role that meat played in the British diet and described the practice of cooking beef sirloin for at least four hours over a spit.  Sunday was the one day of the week when people had four hours to spare to roast beef.  Fortunately a massive lump of meat could feed the family.  They would then use it again in stews, pies and as cold cuts for the rest of the week.  As the cost of meat and coal began to plummet working people continued the habit of roasting beef every Sunday.

How to Roast Beef

A big piece of well-marbled beef is one of the most flavorful choices.  Ideally, roast it on the bone until it is crisp around the edges and pink in the middle.  The hardest thing about cooking a roast is judging the time it takes, and the best way to do this is to use a meat thermometer.

First, let the meat reach room temperature before putting it in the oven so that it cooks evenly. Then, place it on a rack in a shallow roasting pan to create air flow. Next, turn it so that the layer of fat is on the top, and the meat will baste itself.  Begin with the oven around 400°F and constantly check your progress with a meat thermometer, making sure you’re not testing the meat near the bone. A rare roast will be 140°F, medium will be 150-160°F and well-done is 165-175°F.

But, Sunday roasts are not just about the meat.  Yorkshire pudding is also also an important part of the tradition.

Yorkshire pudding is made from a simple batter of milk, flour, and eggs baked in wells filled with sizzling fat.  Essentially it is baked batter with a shape similar to muffins.  A perfect Yorkshire pudding is one that is puffy and risen and crispy on the outside, with a soft hollow center.  One of the biggest challenges with Yorkshire pudding is achieving a good ‘rise’ and the key to success is ensuring that the fat is scalding hot before pouring in the batter.

Back in 1737 the first ever recipe for ‘dripping pudding’, as it was then known, was published in a book titled The Whole Duty of a Woman.   Several years later, in 1747, Hannah Glasse published a similar recipe in her book, The Art of Cookery, renaming the delicacy as a ‘Yorkshire pudding’. Back then, the puddings were flat and were baked underneath the meat to catch the drippings.  Then, they would be served as a first course to help to suppress the diner’s appetite for expensive meat.   In contrast, modern Yorkshire puddings are prepared in a separate muffin pan, eaten alongside the beef and soaked with gravy at the same time.

Are you suddenly hungry for a roast?  We’ve got you covered!  Flavorly’s Sunday Ribeye Roast is waiting for you!

PrevPreviousPad Thai: Science Reveals why it is so Delicious
NextChristmas Food Traditions from Around The WorldNext