Why Peanuts Pack More Than a Perfect Punch of Protein 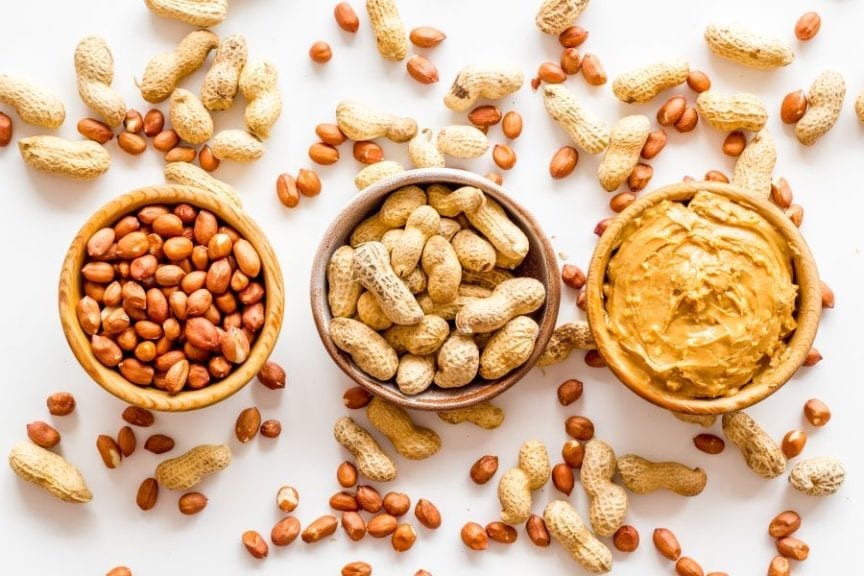 January 24th was National Peanut Butter Day.   Peanuts have received bad press in recent times, partly because of the saturated fat content but mostly for their notorious allergen.  However peanuts are one of the few ingredients featured in cuisines around the world and in that sense one might call the peanut a culinary superstar.  But what gives rise to such acclaim?  The answer lies in much more than flavor alone…

The peanut is a legume crop grown mainly for its edible seeds. Did you know it is also known as the groundnut, goober, pindar and monkey nut?  It grows in the tropics and subtropics, being important to both small and large commercial producers.  The difference between a nut and a legume?  A legume is typically a pod with multiple seeds that will start to open on its own as it becomes ready for harvesting. A nut is typified by a hard outer shell protecting a single seed that we would call the “nut,” and does not open on its own.

Many farmers across America choose to grow peanuts because they are the most sustainable nut.   What makes them that way?  Peanuts are nature’s “zero waste” plant, meaning from the roots to the hulls, no part of the plant goes to waste.  They require less water and have the smallest carbon footprint of any nut, making them a viable option for farmers.  Peanuts are naturally sustainable. Originally introduced as a nitrogen-fixing rotation crop for cotton, they replenish soil with the essential nitrogen depleted by other crops. This means that less fertilizer is needed to grow peanuts, as well as the subsequent rotation crop, resulting in lower greenhouse gas emissions.

Portuguese slave traders brought peanuts to Africa and their popularity spread slowly.  Africans recognized the incredible nutritional potential of this new food (26% protein by weight), plus the plant enriched the soil with nitrogen.  The peanut became the plant with the highest protein yield per acre.  Besides being a major source of nutrition, the tastes of peanuts subsequently became central to West African cooking.

According to the National Peanut Board, peanuts are not only a sustainable crop, but they are also a smart addition to healthy, sustainable diets. Lifestyles rich in plant-based foods support health and have less environmental impact than high calorie animal-based diets. In addition, peanuts are heart healthy and have the heart check from the American Heart Association. Scientific evidence suggests but does not prove that eating 1.5 ounces per day of most nuts, including peanuts, as part of diet low in saturated fat and cholesterol may reduce the risk of heart disease.

Peanuts assume a major role in healthy traditional world cuisine.  For example, satays, sauces, cookies, stir-fries with peanuts, sweets and confections, salads and greens mixed with peanuts – the list of peanut dishes is a long one, rich with history.  It is health that drove the peanut to be a building block of healthy, traditional diets.  Whether in the Mediterranean, Middle East, Africa, the Indian subcontinent, Far Eastern cultures, or in Central or South America, humans have subsisted for millenniums on diets based upon one or several legumes.  Here are some example of famous peanut based dishes.

The popularity of peanut butter soup, like this West African peanut soup (The Spruce Eats) has spread like wildfire over the past couple of years. Peanut sauces are said to originate from the ‘Mandinka’ people of Mali.

Pad Thai is one of the most simple and delicious street food dishes around.  Rice noodles stir-fried with eggs and some tofu, shrimp or meat are the basis for the dish. It is typically flavored with some tamarind pulp, fish sauce, garlic, chili and sugar.  Final touches include a garnish of lime wedge and chopped, toasted peanuts.  It is probably the most famous Thai noodle dish, checking all the boxes for deliciousness.

Although both Thailand and Malaysia claim satay as their own, its Southeast Asian origin was in Java, Indonesia. There, satay evolved from the Indian kebab brought by the Muslim traders. Even India cannot claim its origin, for there it was a legacy of Middle Eastern influence.  What is it?  Marinated, skewered and grilled meat served commonly with a peanut sauce.

Who knew that such a tiny legume was so good for the environment as well as our health and tastebuds?  If you haven’t tried it yet, head over to Flavorly’s menu and order some Pad Thai!