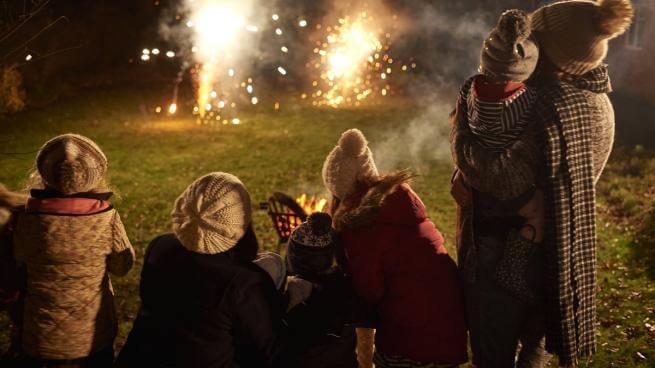 On November 5th every year the British celebrate ‘Bonfire Night’ or ‘Guy Fawkes Night’.  This is an outdoors night time celebration that involves fireworks, sparkers, a bonfire and the construction of a straw ‘Guy’ that is ultimately tossed on the fire.  Inevitably Guy Fawkes Night is also associated with some very typically British dishes such as Bangers and Mash or Shepherd’s Pie.   Interestingly while the celebration has evolved into innocent family entertainment, its roots are macabre.

Who was Guy Fawkes?

This notorious criminal was regarded as the leader behind a plan to blow up the House of Lords after he was caught by the authorities with barrels of gunpowder and matches.  Consequently Guy Fawkes Day (or Night) takes its name from the mastermind behind a Gunpowder Plot to assassinate King James I in 1605.

The Gunpowder Plot conspirators, led by Robert Catesby, were zealous Roman Catholics enraged at King James I for refusing to grant greater religious tolerance to Catholics.  Firstly they planned to blow up the Houses of Parliament (Palace of Westminster) during the state opening of Parliament.  Secondly they intended to kill the king and members of Parliament in order to clear the way to reestablishing Catholic rule in England.

The plot failed. Authorities captured one of them, Guy Fawkes, and took him into custody the evening before the attack. They then rounded up the other conspirators and killed them while resisting arrest or tried, convicted, and executed them later. In the aftermath, Parliament declared November 5 a national day of thanksgiving, and the first celebration of it took place in 1606.

Today Guy Fawkes Day is celebrated in the United Kingdom, and in a number of countries that were formerly part of the British Empire, with parades, fireworks, bonfires, and food.  In addition, revelers toss straw effigies of Fawkes on the bonfire as a symbol of the failed plot.

Traditionally, children carried these effigies, called “Guys,” through the streets in the days leading up to Guy Fawkes Day and asked passersby for “a penny for the guy,”.  Likewise they often recited rhymes associated with the occasion, the best known of which dates from the 18th century:

Fireworks are a major component of most Guy Fawkes Day celebrations.  They represent the explosives that were in the Gunpowder Plot that night.  Guards perform an annual search of the Parliament building to check for potential arsonists, although it is more ceremonial than serious. Lewes, in southeastern England, is the site of a celebration of Guy Fawkes Day that has a distinctly local flavor, involving six bonfire societies whose memberships are grounded in family history stretching back for generations.

Eating on Guy Fawkes Night is all about easy, hand-held food that feeds a crowd and staves off the chills outdoors. While there are no set rules about consumables on November 5 there are some longstanding traditions:

To begin with, Parkin is a bonfire night must, the Yorkshire version of gingerbread. This easy-to-make cake is sticky and moist, with the warm flavors of ginger, nutmeg, mixed spice, and black treacle. It’s delicious when fresh, but gets stickier and chewier after a couple of days.

Bonfire toffee or treacle toffee or plot toffee, is an integral part of every Guy Fawkes celebration. Treacle toffee is easy to make but does require caution.  The toffee needs to reach incredibly high temperatures so take extra caution in the kitchen, and use a good thermometer.

Bangers and mash are quite delicious, as well as a quintessential British food.  Therefore thick, fat, sizzling sausages with creamy mash and lashings of onion gravy make this dish the perfect comfort food for bonfire night. Bring the mash in a disposable tin, cook the sausages on the open fire, and bring the hot gravy in a thermos, so when it’s time to eat, the hot gravy will warm up the mash.

Baked potatoes are a perfect choice for a winter’s night.  They are easy to prepare as a batch and can be customized in any number of ways.  Moreover, you can leave them to slow cook to create that classic crispy skin and light and fluffy centre.  You can also wrap them in foil and cook them over an open flames outdoors.

Hot soup in a mug is the ultimate portable heart-warming food.  Bring it in a flask and decant it when you’re ready, still piping hot!  Any kind will do although seasonal root vegetable is a favorite.

In conclusion, while Guy Fawkes celebrations are unique to the United Kingdom, don’t let that stop you from bringing your celebrations States side!  Here at Flavorly we have some delicious British treats for you.  Head over to our menu and find out what’s cooking!