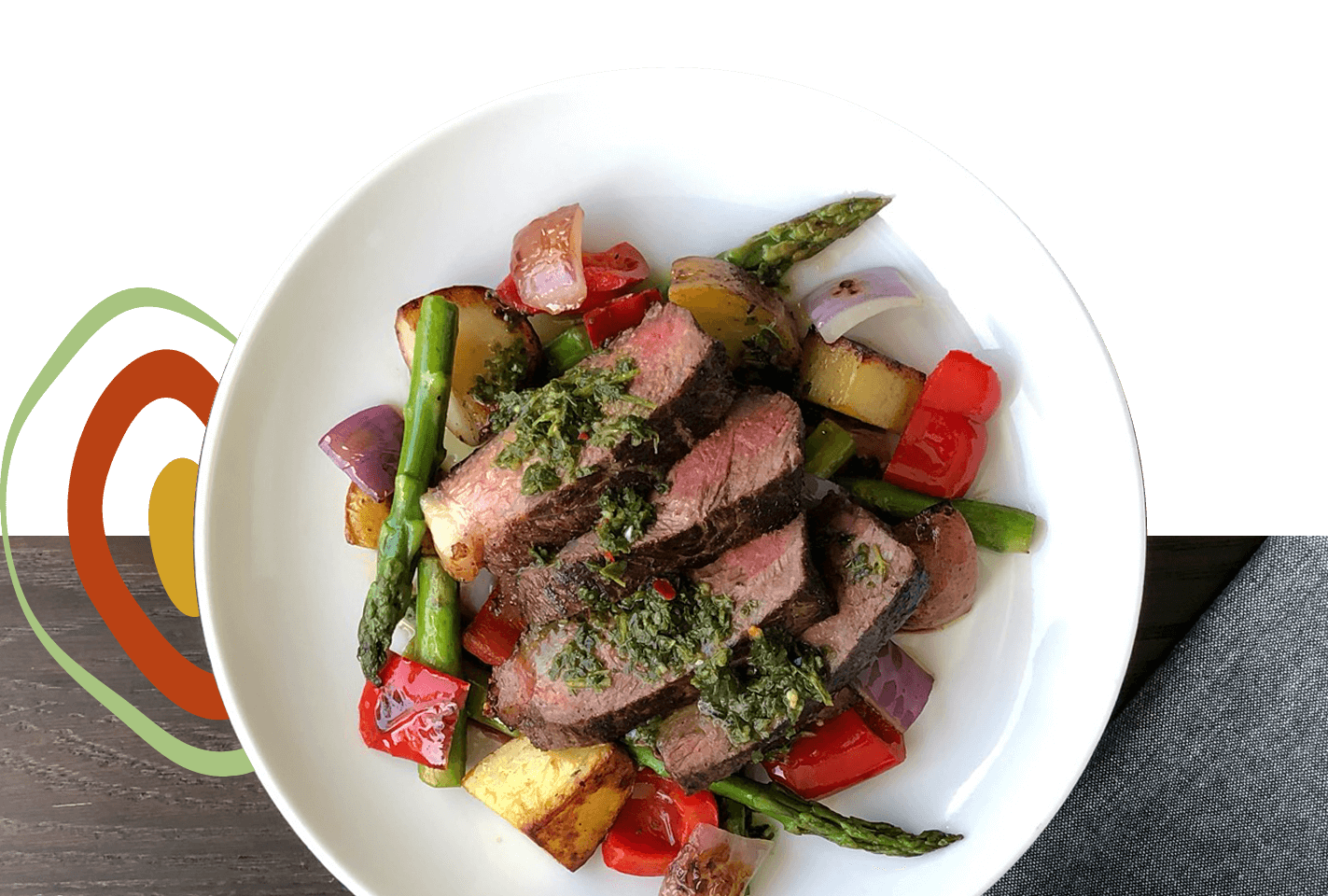 Chimichurri is a savory sauce native to both Argentina and Uruguay. It is a delicious accompaniment to grilled meats, vegetables and fish and easy to prepare.  There is a green and a red version depending on selected herbs, vegetables and spices, but the core composition is essentially the same:  Finely chopped parsley, garlic, olive oil, vinegar and chili.

Chimichurri sauce is high in fat (olive oil) and full of flavor and this characteristic lends itself well to basting, marinating and dipping.  It is a ubiquitous table condiment in South American countries, usually served in a little dish about the size of a ramekin.  Its bright color, fresh flavor and crunchy texture pair exceptionally well with grilled food, most famously grilled beef.

There are a few ideas as to the origins of the name ‘chimichurri’ but perhaps the most credible is the one that relates to Argentina’s Basque immigrants (both Spanish and French) in the 19th century.  Basque Country is a European region that straddles the westernmost Pyrenees in adjacent parts of Northern Spain and Western France.  In fact, today around 10% of the Argentine population are of Basque descent.  In their Castellan dialect the term ‘tximitxurri’ means “a random mixture of things”.

Allegedly, a sauce named tximitxurri is the Basque ancestor of Argentinian chimichurri.  Similar to chimichurri, tximitxurri is a loose condiment involving vinegar, olive oil, garlic and parsley.  However, unlike the modern chimichurri, it is also contains Indian and Basque ground pepper (shampatti and gorria or espelletta).

Epices de Cru, a family-owned tea and spice company based in Montreal, provides the following tximitxurri recipe.  The optional addition of brandy is unique to their version of the recipe.

Chimichurri was probably first mixed together by ‘gauchos’.  Gauchos were skillful horsemen with a reputation for being brave and wild – true cowboys.  They were greatly admired and renowned in legends, folklore and literature and became an important part of South America’s regional cultural tradition.   It is thought that gauchos used chimichurri to flavor meat they prepared over open fires when on the ‘pampas’ – vast, grassy plains extending westward across central Argentina from the Atlantic coast to the Andean foothills.

Huge herds of wild cattle roamed much of Las Pampas until the mid-nineteenth century. The gauchos developed a fondness for beef, especially ‘asado’, which was roast beef (or lamb or goat). They skewered the meat, often a side of ribs, on a metal frame and roasted it by placing it next to a slow-burning fire.  Gauchos favored cooking asado with the wood of the quebracho tree because it smoked very little. They didn’t know it at the time, but the gauchos were laying the foundations of modern South American cooking.

The Asado and The Asador

In Argentina and Uruguay, chimichurri is typically belongs with asado cuisine.  While chimichurri is an intrinsic part of the overall culinary experience, the traditions and rituals of asado are central to food culture in this region.   Following the legacy left by the gaucho horsemen, asado is both a cooking technique and a social event centered around a barbecue.  In many ways asado meat with chimichurri sauce is the heart and soul of Argentinian and Uruguayan cuisine.

While people tend to associate the term asado with beef, it can also involve pork, chicken, chorizo, and morcilla.   A ceramic or metal grill called a parrilla may be used or just an open fire like the gauchos used. Generally, the meats are accompanied by red wine and salads. The meat is prepared by a person who is the assigned ‘asador’ or ‘parrillero’.  The asador is a master of ceremonies and he will often be revered for his personal expertise and secret grilling techniques.  Asado is a custom with strong roots in South America and is a symbol of friendship and companionship.

The quality of beef in this region that accompanies the chimichurri is worth understanding.  Argentinian and Uruguayan beef have earned a reputation for being tender and richly flavored.  This is because grass-fed cattle graze happily and often on the enormous plains of Las Pampas.  For example, 80% of the land in Uruguay provides for the sole purpose of raising livestock, giving cattle the ability to graze in lush fields all year.  The result is leaner and more nutritious beef with more omega-3 fatty acids, producing less risk of cholesterol or heart disease.

Grass-eating cattle are much less likely to acquire or spread disease by comparison with US cattle, which primarily eat grains such as corn. Therefore, antibiotics are not required to stave off infections.  In Uruguay cattle are fed a vegetarian diet with no animal byproducts. Moreover, the use of added hormones and antibiotics for the purpose of growth promotion is prohibited by law. Happily grass-fed cattle gain weight naturally rather than via growth hormones.

As a side note, it is interesting to know that Uruguay and Argentina are two of five countries with more cattle than people.  The other three are New Zealand, Australia and Brazil.  Uruguay has the most cattle per capita at 3.6.

To sum up, having read all about chimichurri, now you may appreciate EatFlavorly’s delicious Chimichurri Steak all the more!  NY Strip Steak (Bife de Chorizo) drizzled with chimichurri and served over a medley of sautéed summer vegetables.

PrevPreviousFather’s Day: A National Holiday that Took its Time
NextBeef Bourguignon – how do you say it?Next