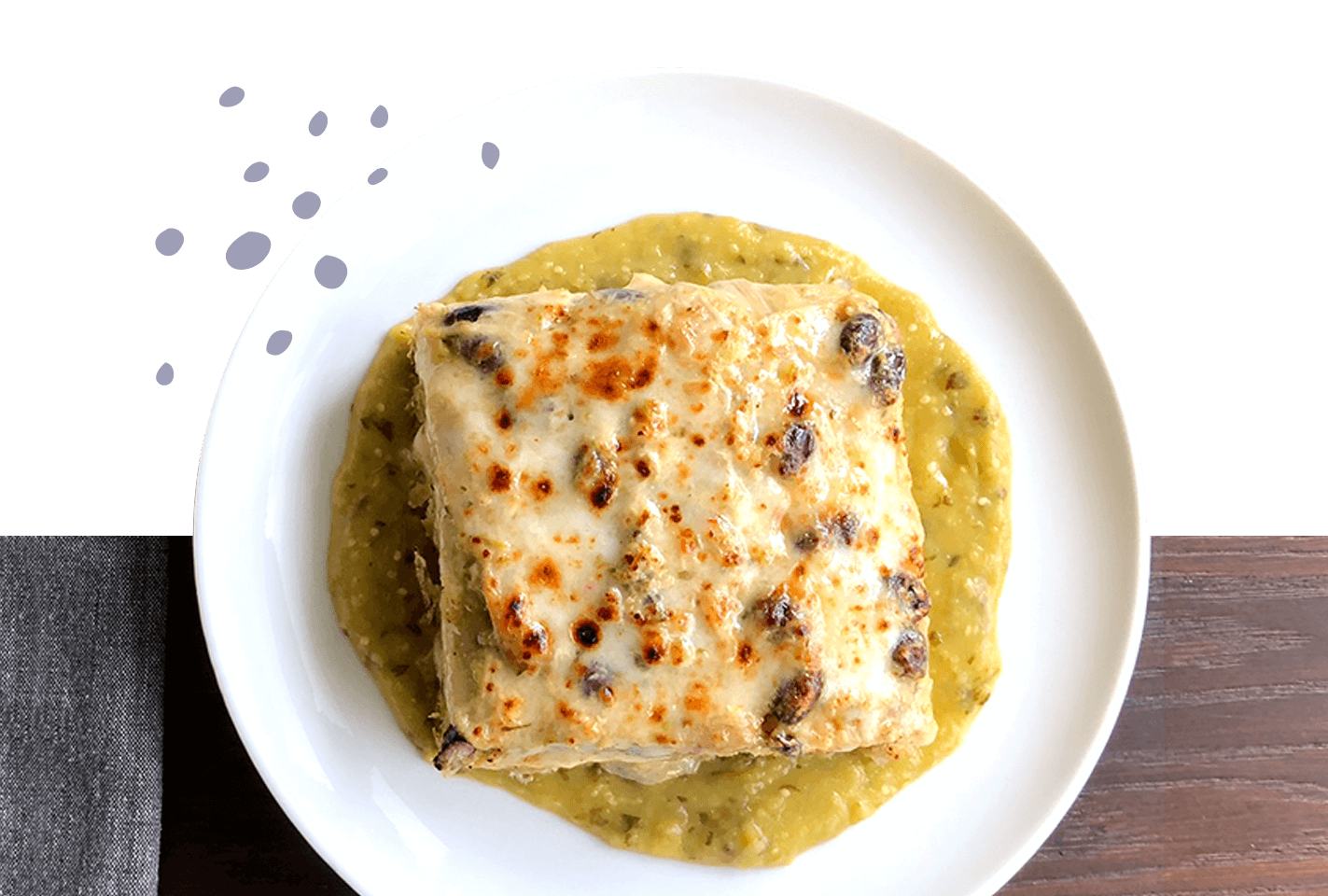 Healthy Gourmet continues to celebrate the Tastes of Texas this week and in its honor, we offer you a ‘potted history’ of (‘the big’) Enchilada, one of Mexico’s famed national dishes and an overview of its many variations.  The traditional enchilada is a dish that inspired our Baked Chicken Enchilada prepared meal.

The Spanish Royal Academy defines the word “enchilada” as a rolled maize tortilla stuffed with meat and dipped in a tomato or chili sauce.  Enchilada is the past tense of the verb ‘enchilar’ meaning ‘to season with chill’.  First season, then bake the tortillas with a mozzarella cheese topping or served unbaked with lettuce, cheese or radishes on top.

The first form of the enchilada dates to the time of the ancient Mayan civilization who inhabited the Yucatan area of what is now known as Mexico. Centuries later, the people living in the lake region of the Valley of Mexico traditionally allegedly ate corn tortillas folded or rolled around small fish.

Later, the Aztecs came into Mexico in the 12th century AD and further explored the idea of a tortilla wrapped around a food filling.    Cheese was added as an ingredient after the Spanish imported it following the invasion of Mexico by the Spanish Conquistadors around 1519.

The Enchilada’s Rise to Fame

In the 19th Century, as Mexican cuisine was nationalized, the first Mexican cookbook ‘El Cocinero Mexicano’ (The Mexican Cook, 1831) mentioned enchiladas. Subsequently, a decade or so later, an established Mexican kitchen dictionary listed them in its database of culinary terms.

Enchiladas have numerous recipe variations reflecting cultural characteristics of Mexican state cuisine.  However, they are all based on the simple foundation of a tortilla dipped in chili sauce and stuffed with a native filling.  You might think, based on the Americanized experience, that one enchilada is much the same as another.  But really it isn’t.  In fact, there are over 20 kinds.  Here are a few examples:

These are chicken enchiladas in tomatillo-cream sauce. This cheesy, creamy dish originated at ‘Sanborns Café’ in Mexico City in 1950.  The name ‘Swiss’ alludes to its copious use of dairy.

From the Mexican state of Jalisco these enchiladas are popular at fairs and fiestas.  They enjoy a creamy poblano chili and tomato sauce and,  to the delight of vegetarians, contain no meat in the filling.  Moreover, the recipe uses vegetable oil instead of lard.

This a common dish originating from the colonial city of Oaxaca.   A rich, reddish brown chili-chocolate sauce using dark chocolate and guajillo peppers characterizes it.  Consequently, the result is spicy, smoky and slightly sweet.

This is a unique enchilada variety from San Luis Potosí in Mexico.  Locals prepare it by adding ancho peppers in the corn dough and filling it with cheese.  Next, they close the dough just like an empanada, and fry the concoction in hot oil until golden-brown in color.

These honor the Guanajato’s region’s silver miners.  Meat and beans form the stuffing and a thick sauce made with guajillo and ancho chilis covers the tortillas.  Finally, queso fresco, pickled carrots and potatoes and shredded lettuce completes the dish.

Papadzules is a traditional dish from the Yucatán Peninsula resembling enchiladas. In its simplest form it consists of corn tortillas dipped in a sauce of pepita (pumpkin seeds) filled with hard-boiled eggs, and garnished with a cooked tomato-pepper sauce.

When is an enchilada not an enchilada?  When it’s a Burrito, of course!  What’s the difference?  Burritos are made using wheat rather than corn-based tortillas.  Moreover, they are bigger, folded like an envelope rather than a cylinder and eaten by hand rather than a knife and fork. Last but not least they are commonly stuffed with refried beans and meat and not layered with chili sauce.  Voila!

In conclusion, if you’re feeling hungry and not in the mood for cooking why not try Healthy Gourmet’s Chicken Enchilada Bake?  Because it’s our Tex-Mex favorite made even better with non-gmo corn tortillas and zucchini squash layered with scratch-made avocado salsa verde, pepper jack cheese, black beans, and tender pulled chicken.

PrevPreviousTexas Food – Fusion Cuisine of The Lone Star State
NextThe All-American Burger: How to Cook up a Proud Memorial DayNext