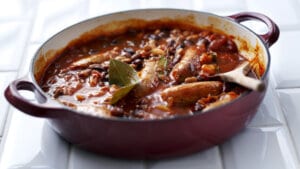 This weekend we are expecting some of the coldest weather in Houston since 1989.  When temperatures drop, the fire is lit in our house and the blankets come out.  So do winter casseroles.  What is a ‘casserole’?  There is little difference between a casserole and a stew. A purist would say that a casserole goes in the oven, heating the dish from all directions, while a stew goes on the stovetop and is heated from the bottom. Another point of difference is a casserole is the name of the pot used for cooking.  One of my favorite casseroles is a hearty sausage and lentil version, simmered with chopped tomatoes and flavored with garlic and rosemary.

The Origins of Casserole

Relics of earthenware reveal that casseroles data back to ancient times.  Since the first settlers arrived on the American shores, the one dish meal has been a cornerstone of our culinary history. However, the history of one-dish meals in this country goes back even further, to the Indians cooking beans in clay pots. They filled these pots with beans, water, and possibly a piece of venison and then buried the pot in a hole in the ground that was filled with glowing embers. It remained in the ground until the beans were done — usually 12 to 16 hours.

However recipes for casseroles started appearing in American cookbooks in the late 19th century.  The dish really grew in popularity during the Depression and World Wars. Vegetables and starches helped to pad a meal so that a small portion of meat could become a more filling dish during times of hardship.

Reaching the height of popularity in the 1950’s, the word casserole was originally introduced into our culinary vocabulary by way of France.  Casserole, french for pan or as Webster describes: a dish of glass or earthenware, with a lid, in which food is baked and sometimes served.

The Invention of Pyrex

Our modern love of the casserole would not exist without a woman named Bessie Littleton, who just wanted a better kitchen experience.  Thanks to Bessie, and her frustration with the breakable stoneware dishes of her time, she asked her physicist husband, Jesse, if he had any suitable alternatives at Corning Glass Works.

The story goes that he brought home a sawn-off bottom of a battery jar made of a special shatter-resistant glass, used by railroads.  The invention of lightweight glass cookware during the time when in-home ovens were becoming more popular radically altered home cooking in America.  Eventually it helped to elevate the humble casserole, which made its way into Betty Crocker kitchens everywhere.

Casseroles Around The World

In Great Britain, Australia, and New Zealand, the term casserole most commonly refers to a dish of meat or chicken with vegetables and a gravy-style sauce.  On the other hand dishes containing a large proportion of pasta or potatoes or creamy sauces are usually ‘bakes’ or ‘gratins’.

Heat the oil in a large casserole or very large sauté pan with a lid. Add the pancetta and sausages and sizzle for 10 minutes, turning the sausages occasionally until nicely browned and sticky. Scoop the sausages out on to a plate.

Add the onions, carrot and garlic to the pancetta and continue to cook for 3-4 minutes until the onions soften. Return the sausages to the pan and add the rosemary, lentils, stock, vinegar and tomatoes, then season with salt and pepper. Bring to the boil and simmer rapidly for 5 minutes, then lower the heat, cover and simmer in the oven on a low heat for 45 minutes, stirring every so often until the lentils are tender.  Check the seasoning, scatter over the parsley and serve from the pan with a winter leaf salad.

PrevPreviousHealthy No-Cook Meals – Essential Nutrition During a Power Outage
NextPasta Quiz! Use Your Noodle to Figure out the AnswersNext