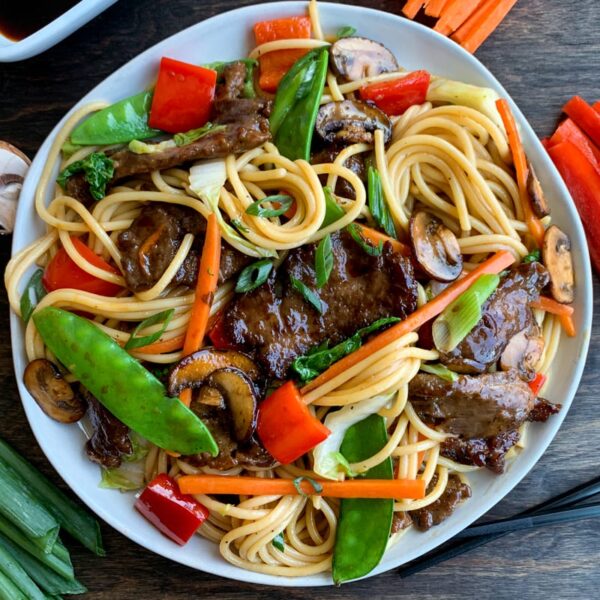 Mein (or mian) is simply the Chinese word for ‘noodles‘ (pronounced ‘me-an’). Both lo mein and chow mein are made from the same type of Chinese noodle. This noodle is made from wheat flour and eggs, similar to Italian pasta. What makes the dishes differ is the way the noodles are prepared. Lo means ‘tossed‘. So, when we’re talking about lo mein, we’re talking, quite simply, about ‘tossed noodles‘. Chow, on the other hand, means ‘fried‘. So, for chow mein, we are talking about ‘fried noodles‘.

While many Chinese-American dishes, like General Tso’s chicken, are nowhere to be found in China, lo mein is actually an authentically Chinese dish, popular and inexpensive throughout many regions in China. There are similarities and differences. Typically both versions use Chinese egg noodles made from fresh wheat flour with egg and are about ¼ inch thick. They are cooked al dente, drained and placed in a sizzling wok where they are then quickly tossed with sauce (as opposed to fried).

Chinese Lo Mein sauce tends to be thin and soupy whereas in America it is darker and thicker. This is because we add ingredients to the basic broth such as sesame oil, rice wine, soy sauce, hoisin, ginger, oyster sauce and a thickener like cornstarch. In China you might find wonton or beef brisket crowning the dish and the noodles, veggies and meat are often served alongside the sauce.  On the other hand, in America all the ingredients are combined. In China, vegetables typically include bok choy, mushrooms and cabbage whereas in America you will see a broader selection.

Here’s how you can tell if you’re eating lo mein:

In chow mein, the noodles really are the star of the show, so any vegetable or protein add-ins are kept to a minimum so they don’t distract from the perfectly crispy noodles. In addition, the noodles are oily (if steamed chow mein) or distinctly crispy (if crisp chow mein).

Modern Lo Mein has some key differences from its original manifestation. In its earliest days during the Han dynasty (206 BC to 220 AD) Chinese noodle dishes were made from millet grains instead of wheat. Analysis of the noodle remains reveals that the ancient Chinese used specific variations of millet known as broomcorn and foxtail, which are still available today. Eventually, millet was replaced with the wheat-based noodle and then lo mein became even more popular throughout China and a few neighboring Asian countries.

The egg flour noodles of lo mein are one of three common noodles in Chinese cuisine:

Are you in the mood for some lo mein? Head over to EatFlavorly’s menu and try out our delicious beef low mein. Featuring pan-seared marinated skirt steak, classic lo mein noodles, and chocked full of veggies like bell peppers, snow peas, cabbage, bamboo shoots, carrots, scallions, and mushrooms, all tossed in our house-made lo mein sauce, this is a hefty meal that won’t leave you feeling heavy like its lower-quality fast-food counterparts. We are based in Houston, TX and offer the best tasting freshly prepared, frozen meal delivery in the nation.

Lo Mein Versus Chow Mein Mein (or mian) is simply the Chinese word for ‘noodles‘ (pronounced ‘me-an’). Both lo mein and chow mein are made from the