Are Buffalo Wings Made out of Buffalo? 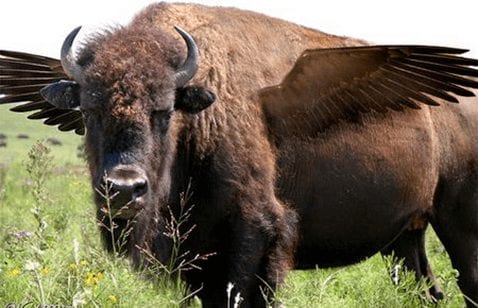 In the next few days Eatflavorly is going to be introducing a new meal – Buffalo Wings three ways.

It occurred to me that even though Buffalo wings are a wildly popular finger food in Texas, I had actually no idea why there are thus named.  Are they made out of buffalo?  Does a buffalo have wings?  What better reason to write a blog than to educate myself on this quintessential Super Bowl sustenance.  Turns out, there’s more than one story behind the name.

What is a Buffalo Wing?

First of all, what is a Buffalo Wing?  Sadly, there are no mystical winged bovines involved.  A Buffalo Wing is a chicken wing section (wingette or drumette) that is generally deep fried, un-breaded, and coated in vinegar-based cayenne pepper hot sauce and butter. Wings are traditionally served hot, along with celery sticks and/or carrot sticks with blue cheese dressing or ranch for dipping.

Just 50 years ago, wings were considered one of the least desirable parts of the chicken often cooked to make chicken stock. But things changed in 1964 – the year the head of Buffalo, New York’s Anchor Bar, Teressa Bellissimo, invented the dish of buffalo wings. There are several different versions of this story.

First version:  Teressa’s husband Frank, who founded the bar with Teressa in 1939, tells an account involving of an accidental delivery of chicken wings instead of the necks usually used to cook spaghetti sauce. In order to avoid wasting the wings, they were cooked into a bar appetizer.  However, Dominic, the child of Frank and Teressa, who began managing the restaurant in the 1970s, tells a different story.

Second version:  The Anchor bar was doing very well, so Teressa began cooking up a special free dish to give out at midnight. Teressa decided to pick up chicken wings, cutting each wing in half to create a drumstick and a ‘flat’ part. Then the wings were deep-fried sans breading, covered in hot sauce, and served up with celery from the bar’s antipasto dish, as well as blue cheese salad dressing. Within weeks, the dish became wildly popular.

Third version:  This story alleges that Frank and Theresa’s son and some friends came in late one night looking for something to eat (although some have suggested that it was for a band that was playing in the bar that night). All that was left in the kitchen was chicken wings, which Teressa fried up, placed in hot sauce and served to the hungry young men. The wings were a hit and a legendary food was born.

New York Writer Calvin Trillin presents a competing theory.  He wrote that on his trip to Buffalo, he met a man named John Young who bluntly stated, “I am actually the creator of the wing.” Young points out that growing up in an African-American community, he’d frequently eat chicken wings as a standard dish.

John claims that he invented a special “mambo sauce” at his restaurant, John Young’s Wings ’n Things, during the mid-’60s. But he served his wings breaded and whole (rather than chopped into flats and drumsticks).  These distinctions that suggest to many wing traditionalists that they belong to an entire different category.

Daniel Alfaro of The Spruce Eats notes that the development of a cuisine is almost never the result of a single person having an idea.  Instead it is rather the result of slow and steady forces of history, culture, demographics and economics.  So while Teressa Bellissimo or John Young may have created local following in the consumption of saucy chicken wings, the inspiration and journey of wings throughout other parts of America was probably due to other factors.

Which Story is True?

If television were to present competing theories about the Buffalo Wing, I feel like Hallmark would air a movie about Teressa Bellissimo and the Anchor Bar in Buffalo, NY while CBS 60 minutes would air a segment about migration and the meat processing industry!  The reality is that chicken wings as we currently eat them, including the spicy sauce, probably originate in Chicago although the story of the Anchor Bar (whichever version) is an honest legend.

Chicago through the early and middle part of the 20th century was the biggest meatpacking hub in North America.  The massive migration of Black Americans (from the West Indies and West Africa) brought culinary traditions of barbecue and fried chicken to meatpacking cities like Chicago, Kansas City and St. Louis.  Subsequently, a plentiful supply of chicken wings rejected by the meat processing plants made the popularization of chicken wings possible.

How did chicken wings become pub food?  From 1920 to 1933, the sale and consumption of alcohol was prohibited in the U.S., which led to the proliferation of illicit establishments called speakeasies.  Chicago alone boasted as many as 10,000 by 1930.  Most of these establishments advertised “free lunch.”  The deal was that the food was free but you paid for your drinks.  And what kind of food?  Common offerings included deviled eggs, salted nuts and chicken wings.

The popularity of so-called “finger food” in America stems from this period. Before that, the upper classes might enjoy canapés at cocktail parties. However, only with prohibition did pairing finger food with adult beverages become popular with ordinary folks.

It seems that the tradition of pairing chicken wings with spicy sauce also originates in Chicago. The most famous example is called Mumbo sauce (sometimes referred to as Mambo sauce). It was originally developed as a barbecue sauce at a Chicago rib joint called Argia B’s, and later bottled and sold to customers.  Mumbo sauce, a blend of ketchup, vinegar, sugar and red pepper, has been a mainstay of Chicago-style chicken wings since at least 1957.  On the other hand, John Young’s establishment only opened up in 1964…

Among the most iconic of modern football foods is undoubtedly the chicken wing.  According to the National Chicken Council, Americans smothered some 1.38 billion chicken wings with Ranch over the 2019 Super Bowl weekend. This, as the Chicken Council PR team points out, is an amount of food that weighs more than the total of all of the 32 existing NFL teams and can circle the Earth three times over.

Today’s consumption of Buffalo Wings is staggering because of its newness as much as its size. Flash back to any point in American history prior to the 1970s and you would have had to have pay many Americans to put this part of the chicken in their mouths.

If I have whetted your appetite for some wings, why don’t you head over to Eatflavorly and check out our menu?  If you don’t see our Buffalo Wings Three Ways listed, you will very soon…